Diwali, Deepavali, Dipabali – it doesn’t matter how you spell it or pronounce it, a celebration is a celebration and we Malaysians LOVE celebrations! Since Diwali’s right around the corner, we thought we’d share the story behind this momentous Indian festival (with a few Fave sidenotes to make your Diwali extra special).

Once Upon a Time…

There was a King who had five sons from three wives. The first son was named Ram and he was well-loved by the people of his kingdom. When he walked through the streets, everyone cheered for him – and for good reasons. His intelligence was lauded, his judgement just, his skill with weapons—especially the bow and arrow—was unparalleled, and he was married to the most beautiful princess, Sita. So, it became obvious to all that out of the five sons, he was the best candidate to become the next king.

Seeing this, the King’s second wife, and mother of Ram’s brother, grew jealous. As all mothers want the best for their child, she wanted her her son to become king.

Just days before Ram was going to be announced as the new king, she stormed through the palace and went before the King. After a long argument, she got her way, and her son was going to be the new king. Ever gracious, Ram wished his brother the best of luck and was about to return to his chamber, when the queen threw down her final ultimatum – Ram and his wife, Sita, had to be exiled from the kingdom for 14 years!

Guys, this is a lesson that sometimes two (or three) is not better than one. So keep your one and only girl happy with our suggestions of Fave dates that won’t empty your wallet.

Without question, the obedient Ram and Sita prepared to leave the kingdom. Unable to see them leave, another one of Ram’s brothers, Lakshman, decided to follow the couple into exile.

The three of them built a small hut in the forest and lived off fruits, nuts, and whatever they could scrounge up in the forest.

While they had to go hungry sometimes, it doesn’t mean you have to. Get a Diwali Twin Pack of Famous Amos cookies if you’re looking for a snack, or take your pick of buffets, banana leaf thali meals, and more with the Fave Deepavali Collection. 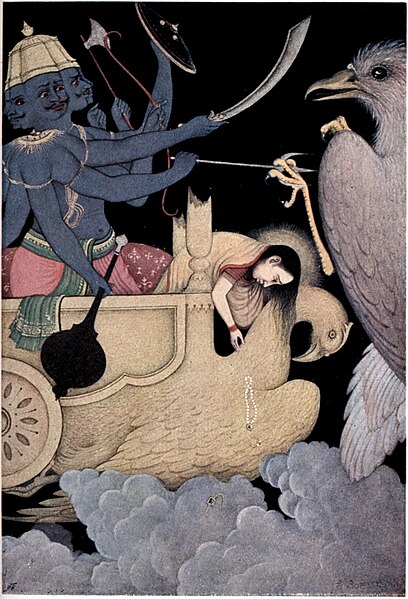 The years passed by peacefully, and soon it was only a matter of months before their exile period was over. But good times will end, and while Ram and Lakshman were out hunting, Sita was alone in their hut cleaning and getting ready for the two princes’ return.

At that time the ten-headed demon king, Raavana was flying overhead and he caught sight of her. Enamoured by her beauty, he decided that must have her as his wife.

Raavana put on his charms and tried to seduce her, but Sita was steadfast in her love for Ram. Irritated and fed-up, Raavana grabbed the screaming Sita and kidnapped her.

While demon kings might not be a frequent sight in today’s day and age, it never hurts to keep yourself well protected. Sign-up for a self-defence class, Muay Thai, or any other class with the Fave Fitness Collection and feel safe in the knowledge that you can kick some butt.

When Ram and Lakshman returned, Ram was heart-broken to see Sita missing. They strapped on their bows and arrows and tracked Sita to the demon king Raavan’s palace.

After an epic battle that resulted in Raavan being decapitated, Ram and Sita were reunited! By then their exile period was over and the three of them returned to the kingdom.

Excited by the return of their Prince Ram, the people of the kingdom cleaned their houses and drew colourful ‘rangoli’ patterns with rice on the floor to welcome good luck and prosperity. They also lit oil lamps outside their house at night to celebrate the prince’s homecoming.

If reading the last sentence just triggered the thought “Oh my god! I forgot to clean my air conditioners” or “I need help cleaning my house.” Don’t worry, we have you covered. Fave offers a variety of service offers, including housekeeping, mattress cleaning, and air conditioner cleaning services.

After arriving at the palace, Ram rushed to meet his brother whom he had missed dearly. But upon reaching the throne room, a beautiful sight brought tears to his eyes. His brother, despite the insistence and prodding of his mother, had not taken up the mantle of king. Instead, he placed a pair of Ram’s shoes at the foot of the throne to signify to one and all who the true king was. Ram embraced his brother and took his rightful place as the king.

If you were as moved by this gesture, as we were. Go and give your sibling, cousins, and best friends a huge hug and treat them to a meal. Head over to Fave, and browse through our buffet collections, or indulge in a scrumptious meal at any of our Top Restaurants Collection, including Marché Mövenpick, Mikey’s New York Pizza, and more!

Alternatively, browse through our FavePay page for more choices that allow you to enjoy your meal and get instant discounts at the same time. Additionally, receive cashback of up to 20% on your next visit!

Have a Happy Diwali!

Tags: Deepavali Fave Deal FavePay
Categories: Activities Fave Features Food
Fitness On-the-Go: 24-Hour and Late-Night Gyms to Try
Perfect Gifts for the Aquarian in Your Life
3 Steps to Keeping Up with the Pitch Perfect Pros
7 Spots for Your First Date
5 Places to Eat in Damansara Uptown
5 Dessert Spots for Your Instagram Feed
Eat out and get an instant discount with FavePay
Fantastic Local Destinations and Where to Find Them
5 New Buffets to Try this Ramadan